Update from Irvine Peck’s Agaya (’18) in Gabon: On Education, Soccer, and Politics

I went to Gabon for two weeks right after spring semester ended. I was excited and full of joy. The last time I visited Gabon, I was pretty young. About seven years old if I remember correctly. I remember not wanting to go there and wanting to enjoy my summer in France with my friends. Looking back at it, it was silly and when I left the U.S. on May 16th 2015, I was decided to enjoy my trip and love every moment that I was there. 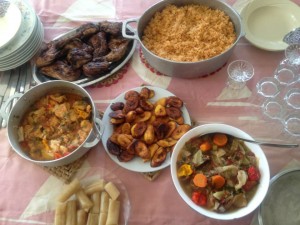 The country is beautiful and the people are amazing. I had lots of fun and learned many things about my cultures that I was unaware of. Amidst the beauty and the joy that I found there, I also saw a lot of sadness, frustration, and disappointment. Those stemmed from the political situation there. Every morning, children in school uniforms could be spotted walking around town because once again school was closed. The teachers have been on and off multiple strikes because they have not been correctly paid since about 2009. Many people are forced to leave the country to fulfill an education, but that is only if they can afford it. I met a college student who went to school for half of the fall semester and did not go at all for the spring semester because students were rioting and professors were striking. Some professors decided to teach again so she, along with other students, now had to catch up on the semester they missed during the summer. These students are however the lucky ones because not every professors or teachers returned to teach. When students went about a semester or a year without going to school, it is called “Année Blanche” (white year). The tolls of the many Année Blanche were seen with youths who had too much free time and not many activities to fill up their time with so started partaking in illegal activities. It also left teachers and professors unable to support their families. My mother and I met a teacher who had 0 fcfa [local currency] in her bank account.

While the Gabon’s educational system is failing, the president has allocated most of the country’s money to his and his cabinet’s personal needs and his interest. Ali Bongo Ondimba, the dictator of Gabon, enjoys sports so he has allocated much of the country’s money to soccer. He built a beautiful stadium in the capital, Libreville, and destroyed many people’s home in order to host the African Cup of Nation in 2012. Now he is building another stadium in another province to host African Cup of Nation of 2017. He went as far as paying Lionel Messi about 2.4 Euros in order to set the first stone of the stadium, and he proceeded to personally drive Messi around the city. This action caused many protests in the country as it is money wasted that could have been used toward paying teachers. The situation is still under investigation as the dictator claims that he did not pay Messi.

As the presidential elections are coming up in 2016, many expect that there will be altercations between citizens and the military as members of the opposition party have decided to put an end to the Bongo regime and the people is unhappy. Also, Ali Bongo Ondimba wants to hold power until he dies like his father did. His father Omar Bongo Ondimba was president for 42 years from 1967 until he died in 2009.

I still do not fully understand the political issues in Gabon, but I know that it is in a trouble state. I am trying to stay updated with the situation there. I am glad that I went back to my mother’s land and I am looking forward to my next visit there. 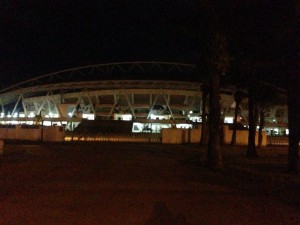 Stadium in Libreville by Night (courtesy of Irvine Peck’s-Agaya)