I traveled to Kenya this summer with the goal of focusing my senior thesis research on understanding the motives behind and the interpretations of the Mau Mau rebellion against the British colonial government in the late 1950s. However, after conducting interviews with Kenyans, I was left with many questions focusing on memory: specifically, how is public memory is constructed in Kenya about decolonization and how do people’s individual memories demonstrate about that period influence their perceptions of current political issues? 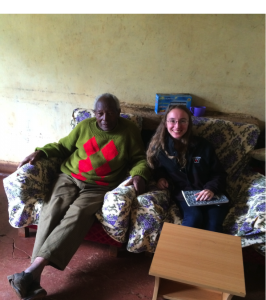 While researching I was particularly struck by how much memories of the rebellion were shaped by people’s understandings of ethnicity and the government’s changing relationship with the movment even changing portrayal of it over time. My most exciting interview was on my second day in Nairobi, where I first came in contact with the complicated relationships between the ethnic group most associated with Mau Mau, the Kikuyu, with other minority groups and how their historical relationships influenced Luo understandings of Mau Mau in terms of ethnicity and the portrayal of Mau Mau in Kenya.

Similarly, I was surprised by the diversity of people’s reactions to discussing the rebellion. For such a major event in Kenya’s history, a surprising number said they knew very little about Mau Mau. It was difficult to tell whether this was because those Kenyans truly did not know about it, whether they believed their knowledge was not worth sharing, or whether they were unwilling to talk to a Westerner. This last issue was one I faced repeatedly.  People feared how Kenyan history would be portrayed by an outsider, especially given how Mau Mau had originally been depicted as barbaric and atavistic by the British at the time; even those willing to speak with me expressed the importance of sharing their version of Mau Mau with the rest of the world. Given this hesitancy, I came back to the U.S. with an increased consciousness of the responsibility that comes with writing about another culture’s history. After returning home, I was left grappling with how to accurately convey my interpretation of events while always checking how my status as a Westerner might influence my understanding. The big question remains how to balance my responsibility to share the ideas and beliefs of the Kenyans I interviewed with my own understanding of Mau Mau in history.