Geneva and I had originally intended on showing up, driving to Badgji and building the center; however, this was not so. When we first got to Juba we met with an architect named Dunston Mundeer who we contacted before our trip to help us with an architectural design for the building, and one that would make sense for maternity ward. Mr. Mundeer was extremely fundamental in Juba [South Sudan’s capital] because he had already set up appointments with the Ministry of Health for us before we arrived. Our first week in Juba, which we thought would be used for collecting materials was instead filled with numerous meetings with officials from the Ministry of Health as we worked out a design that the government would approve (as it is a community project and not a private maternity center). We were also very pleased to hear that the government is willing to help provide some services for the ward once built, including medical supplies, and in the future a full time doctor. 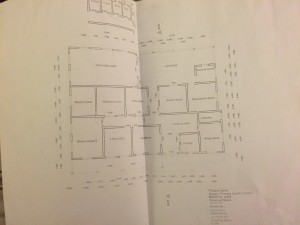 In our second week we met with the Moru community male youth and elders in Juba, as it was deemed crucial to ask for their permission and inform them of the project before we begin construction. After a lengthy (four hour long meeting) we received the blessing and support of the community, but were also informed of some very unfortunate news.

Unfortunately security in Western Equatoria [province] severely deteriorated in the beginning of June. Due to what was initially reported as a cattle raid, gun violence has increased and an entire village was burned down (supposedly by the Dinka- the main ethnic group backed by the government- as the president is also Dinka). After the village was burnt down, which resulted in the death of approximately 9 people, the SPLA has been very prevalent in Western Equatoria, but not in a good way. We were told that specifically in the case of women travelers the journey (a 6 hr drive) was less than safe, as just last week seven women were pulled from a car and kidnapped. At first we were still planning to drive out there with a security detail, but even that was deemed unsafe by the major general of police in Western Equatoria, Charles Boza, also a Moru community elder and family friend, and they did not want to put us at risk. Instead we negotiated a couple of other things. We arranged for three women to travel to Juba from Badgji, which was still a risk  for them, but they realized the importance of the situation and came almost immediately. Thanks to the Brodigan fund we were able to pay for their travel because of its expensive cost (due to security issues). 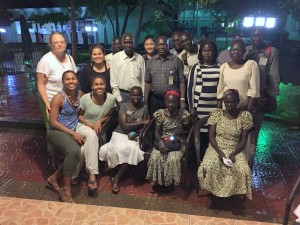 Orelia and Geneva pictured to the left front.

We had an incredibly successful and hopeful meeting with these women: Rina Awadio (the current midwife in the village), Naida Kyila, and Ngnes Juma. During this very very long meeting, we heard the concerns of the women and evaluated their specific needs so we could cater to them in the architectural design. We also exchanged ideas on the forms of community development that would be most useful to the community. Most importantly these women stressed that they would mobilize the community in preparation for construction of the building and would begin preparing the foundation for the center.

As for the majority of the funds. We bought some materials (cement and materials for brick making) for the foundation but these are being held in storage until the road is safe for them to be transported to Badgji. Because we were unable to go to the village, we opened up a business account with the funds we raised (from the Brodigan award, The university of Vermont, two churches affiliated with the United church of Christ, and three Private donors) at a Kenyan bank in Juba. We will be able to access these funds online, and we have put our Juba contact Dunston Mundeer, our architect, in charge of the funds on the ground (however no withdrawal can be made without contacting us first). In opening this account, we also received recognition by the government of South Sudan as an NGO (this was necessary as many bank accounts are being watched by the government right now and being accused as bank accounts supporting the rebels).

The construction of the foundation is scheduled to begin next month. In the mean time, Geneva and I, along with our partners from UVM, Karen and Valerie (who will remain in Juba for another two weeks) have worked out other fundraising plans, and we intend to return to South Sudan in December, in hopes that the security issues have improved and we can conduct the mental health community meetings as we had initially planned.

From my [Orelia’s] standpoint, the South Sudan I have visited over the past two years is falling into paranoia and insecurity. We had a lot of trouble dealing the government, and it took a lot longer to get their approval than we expected. While Dr. Alexander Dimitri, the director of reproductive health at the Ministry of Health was in full support of our project, we found it was often difficult to convince other men in the government of the huge necessity for a maternity clinic in Badgji. We also discussed trauma amongst women in the community, and while it is something that the government largely wants to address, we found it interesting that the government doesn’t connect mental illness and trauma, so that will be another obstacle we must face.

Orelia is currently planning another trip to South Sudan in December to continue work on the maternity clinic project. In the mean time we have taken to fundraising by selling bracelets, jewelry, and other hand made crafts by women from Juba.